I came across an interesting article on Forbes the other day by Michael del Castillo. He tells a story about data scientist Allen Day, a former Google employee, who while looking at some of the tools he developed there, saw something puzzling. What he saw was “a mysterious concerted usage of artificial intelligence on the blockchain for Ethereum.”

Day was able to look into its blockchain and see a “whole bunch” of “autonomous agents” moving funds around “in an automated fashion.” Although Day has no idea who created the AI, he suspects “they could be the agents of cryptocurrency exchanges trading among themselves in order to artificially inflate ether’s price.”

Day also remarked that he didn’t believe this was the work of a single exchange, but is rather a group effort. Part of Day’s job is anticipating demand for a product before it even exists, and in the light of what he has seen, he believes that making the blockchain more accessible is the next big thing.

Let’s not forget that Google made the Internet more usable, bringing it billions in revenue, and if Day is correct in his predictions it could have another major pay day by making the blockchain searchable. Del Castillo says if it does, “the world will know whether blockchain’s real usage is living up to its hype.”

Day has already been working on this with a team of open-source developers, who have been loading data for bitcoin and ethereum blockchains into Google’s big data analytics platform called BigQuery. And, with the help of lead developer Evgeny Medvedev, he created a suite of sophisticated software to search the data.

Day is hoping that his project, known as Blockchain ETL (extract, transform, load) will bring Google’s revenues from cloud computing services up to the level of Amazon and Microsoft. Google is some way behind both of them, but it will struggle to match Amazon’s revenues of $27 billion from cloud services, because Amazon has been in the blockchain game since 2018 with a suite of tools for building and managing distributed ledgers. And Microsoft got into the space in 2015, when it released tools for ethereum’s blockchain. These two companies are focused on making it easier to build blockchain apps, whereas Day wants to reveal how blockchains are actually being used, and by whom.

Day has been demonstrating how his Blockchain ETL could function by examining the hard fork that created bitcoin cash (BCH) from bitcoin. “I’m very interested to quantify what’s happening so that we can see where the legitimate use cases are for blockchain,” Day says. “Then we can move to the next use case and develop out what these technologies are really appropriate for.”

Day is now expanding beyond bitcoin and ethereum. Litecoin, zcash, dash, bitcoin cash, ethereum classic and dogecoin are being added to BigQuery.

It seems Google is waking up to blockchain and is now powering ahead by filing numerous patents related to the blockchain. The company is also encouraging its developers to build apps on the ethereum blockchain, and GV, Google’s investment division has made some investments in crypto-related startups. 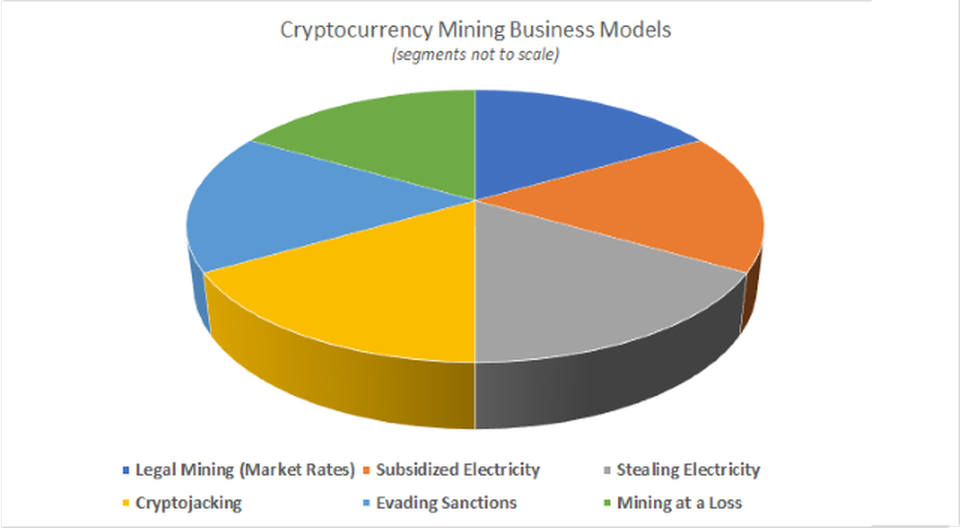 Crypto miners are rewarded for processing transactions. All you need to be a miner is a rack of high-speed computers and access to electricity. Of course, a lot has been said about the latter: the consumption of energy needed to run the software and hardware on a large scale is astronomical in cost. In fact, some mining outfits are consuming the same amount of electricity as a small country. That’s why so many are based in the cold wastes of the Arctic Circle where lower temperatures keep the machines cooler and therefore reduce energy consumption.

When mining started, people could do it on machines at home, but that didn’t last long. The potential to make big bucks meant that competition increased and miners purchased massively powerful computers while scaling up their operations to remain profitable.

Then bitcoin crashed and this reduced the ability of miners to make a profit, and legal crypto mining using electricity at market rates is now becoming increasingly unfeasible, even in those places like Iceland.

Mining can still be profitable

But there are still opportunities for profitable mining. One way is to find subsidised electricity. For example, In Washington State, hydroelectric power generates far more energy than locals can consume, thus attracting a booming business in crypto mining. Instead of exporting it to other states, miners could buy it. This is a legal model. The other forms of profitable mining are certainly not.

The first of the illegal mining options is to steal electricity. That is what used to happen in the early days, but energy companies have got wise to that and there have been some prosecutions for theft in China and the USA.

Another mining model is cryptojacking. This has outperformed ransomware as a form of obtaining crypto. How does it work? A hacker introduces crypto mining software onto a target victim’s computer without their knowledge, thus generating crypto for the hacker while stealing processor cycles and electricity from the victim.

And there we have the current crypto mining scenario. As Jason Bloomberg writes at Forbes: “For all the crypto fanatics out there, therefore, there is a reason to take heart — there’s no way crypto values will ever drop far enough for mining to cease. Organized crime wouldn’t let that happen.”

Marcus Hughes, the British lawyer and lead counsel for San Francisco-based crypto exchange Coinbase, predicts that 2019 is going to be the year that we see big changes in bitcoin regulations.

Hughes remarked, “Within the next year or two, we’ll see big developments, and regulation will take shape this year, particularly in Europe.”

He pointed to the fact that the United Kingdom’s Financial Conduct Authority (FCA) is in the process of carrying out a consultation regarding crypto derivatives. This could see a ban on the sale of derivatives based on cryptocurrencies such as bitcoin. Furthermore, the British government has pledged to empower the FCA to oversee all crypto assets.

An article in the UK’s Daily Telegraph at the end of 2018 also revealed that the FCA is investigating 18 companies “in connection with cryptocurrency transactions amid escalating concern over the threat posed by Bitcoin and other digital assets to the integrity of financial markets.” But that is not all: the FCA has opened 67 inquiries since November and is clearly stepping up its scrutiny of all firms involved with crypto in any manner.

Nicky Morgan MP, who hairs the influential Treasury select committee, said, “t is clear that the government and the FCA share the committee’s concerns on crypto-assets, including the lack of regulation, minimal consumer protection and anonymity aiding money laundering … The committee will keep a close eye on these consultations and will continue to press for regulation.”

And the European Banking Authority is calling for standardised regulations for cryptocurrency operations within the European Union. This is to remove the potential for “unfair regulatory arbitrage while protecting bitcoin and cryptocurrency investors across the bloc.”

Hughes said about this scenario: “We could end up with E.U. member states creating their own crypto laws, but it’s certainly possible we’ll get a unified approach in Europe. It would make life for companies like Coinbase a lot easier.”

He also commented on the arrival of institutional investors in the crypto sphere, saying: “I would be surprised if other traditional financial services executives didn’t make the move across to the bitcoin and cryptocurrency world. As the industry matures and is better regulated it will need the talent and experience to manage it.”

Cryptocurrencies are making steady progress in the traditional financial system. Their ascendance shines a spotlight on exchanges where people trade crypto assets and a number of them have been found wanting, due to a ‘single point of failure’ that allows hacks to occur.

The solution is decentralised exchanges (DEX), because this type of exchange allows users to keep control of their funds throughout the trading procedure. As might be expected there is more than one type of decentralised exchange to choose from, and there are three formats that are considered the most likely to be the exchange models of the future.

At the moment, decentralised exchanges are being developed in three modes:

These are entirely blockchain based and are really the first generation model. With this DEX, every new order or adjustment to an existing order updates the state of the blockchain.

What’s the problem with this type of DEX?

Although it protects user privacy and security this form of DEX makes exchanges illiquid, slow, expensive and unable to operate with other DEX.

The Ox protocol is good example of this model. It is built on the Ethereum blockchain’s solution for off-chain orders. Execution of the trades happens on the Ethereum blockchain,which means users have control of their funds until the exchange takes place. The order books are hosted by a third party called Relayers. This enables the exchange to maintain liquidity and create a more robust infrastructure for traders. For example, after submitting an order to the Relayer, a market maker waits for an order to be filled, at which point the trade is trustlessly executed on the blockchain.

This model connects the buyer and seller function when there is low liquidity. With smart contract-managed reserves, instead of having to find a buyer for the bitcoin, a user can trade with an external reserve, depositing bitcoin into the reserve and receiving ether in return. Bancor is an example of this model.

Although the existing decentralised exchanges need work to bring them up to a comparable speed with the traditional centralised exchanges, there are several innovative entrepreneurs working on finding the best solutions, and hopefully we will see them next year, if not in 2018.