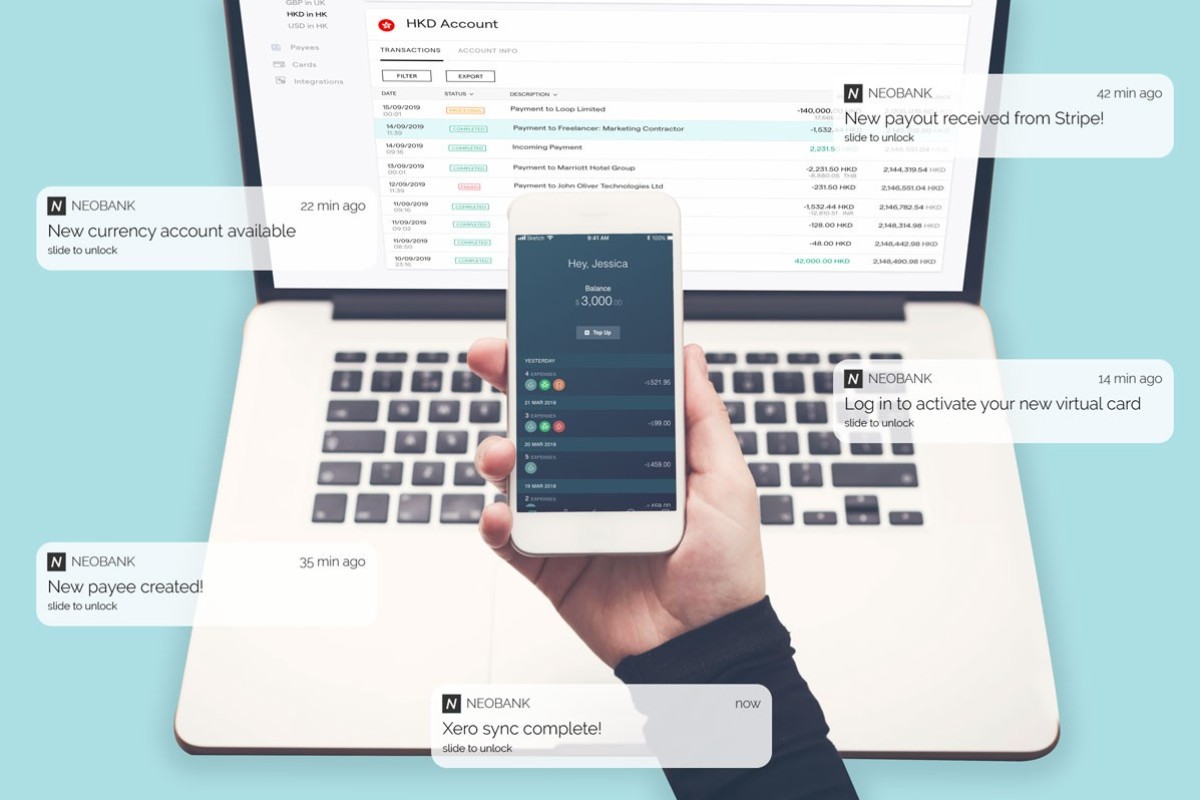 Banking is going through some changes thanks to the arrival of neobanks. The traditional banks continue to work at their own pace, and are still largely bound by legacy systems that go back decades. Change is not a simple process for them: it is similar to trying to change the direction of a massive oil tanker at speed on the high seas. In other words it is something that takes a while.

The arrival of the neobanks, which are the digital-only challenger banks, (there are challenger banks that don’t fit in the neobank niche because they are more like traditional banks) has caused an upset in the banking sector, but what is the real difference between a neobank account and the type of bank account that most of us already have?

The first, and most basic difference is that they are technology driven. And they don’t have physical branches. That can be off-putting to customers who feel more secure by having a branch that they can go to and talk to someone. In this way, neobanks have a greater appeal to younger sections of the population who are used to operating their existing bank account through an app and online.

Often neobanks don’t have a full banking licence, but they can still offer the range of services offered by traditional banks. They can do this because they have an alternative type of financial services licence, such as an e-money licence, or they have partnerships with financial service providers that hold an appropriate licence.

Opening a neobank account is extremely simple and can be done via a smartphone, or a computer in minutes. There’s no wait while all your documents are assessed by head office. This has a huge appeal for many customers, especially those people who may be dismissed by traditional banks, because they don’t have a large enough income to make them a ‘worthwhile’ customer. Some banks now insist that customers keep the balance in their account at a certain level, and this means many people are excluded from holding an account, or find that their account is suddenly closed.

And we all know that traditional banks often charge exorbitant fees. The neobanks offer free accounts, as well as a range of accounts with a monthly fee, but even these are much lower than an established bank would charge for the same service. Chime, for example, is a neobank in the US that offers debit cards and fee-free overdrafts.

Neobanks are also cutting out a sector for themselves with small businesses and freelancers, which is a sector that the traditional banks don’t serve very well. For example, UK neobank Coconut focuses on serving freelancers. They’ve developed specific accounting features, including VAT and invoicing that cater to the day-to-day needs of the self-employed. For example, a freelancer who needs to request payment from a client can use Coconut to send invoices directly from the app.

Overall, neobanks are changing the entire banking experience. It will take some more time to grow this new financial sector, but it seems to me that every day one meets yet another person who has added a digital-only banking service to the tools they use to manage their money, and that is progress.

As Off the Chain writes, this week is a big one for crypto. It may even become a defining week, when at some point we look back at its events.

The Facebook hearings in Congress play a major role in this. David Marcus has faced two different committees, neither of them over-informed about cryptocurrency in general. He sat like one man alone holding back the tide of ill-informed views held by America’s lawmakers. For example, they (and the President) are still convinced that crypto is primarily used for criminal activity, when by now we all know that cash is king in the drug world for starters.

However, while Elizabeth Warren probed the issues of privacy and trust, ever implying that it would be almost impossible to trust Facebook after the Cambridge Analytica scandal, the hearing that most concerned crypto’s supporters was that with the Banking Committee.

As numerous journalists have noted, the average age of a US Senator is 61.8 years old, and most of them are not open-minded enough to grasp the innovations that blockchain and crypto can bring to the United States. Most of them have benefitted financially from the old system, so why change it. Who cares about the future when ‘I’m alright Jack’.

These hearings were significant, but even more noteworthy was information leaked over the weekend regarding a bill that has been drafted by Congressional representatives aimed at preventing large technology companies from becoming financial institutions. It is literally titled “Keep Big Tech Out of Finance Act” and contains a number of extremely worrying statements, with potentially dangerous ramifications.

The Act targets companies like Facebook, Amazon and Uber, but totally ignores the fact that Goldman Sachs and JP Morgan are engaged in the same blockchain-related projects as the Silicon Valley boys.

And consider this: the same lawmakers who are participating in the Senate Banking Committee hearing, are some of the lawmakers who have received significant donations from the banking industry. These guys are hardly going to make changes that have a negative effect on banking.

The cost of prohibition — America loses

They are also proposing to prohibit digital currencies and this would put the United States and US-based technology companies at a significant disadvantage. There was some irony in Marcus being asked as to why Calibra had registered in Switzerland rather than the USA. There’s your answer, although Marcus simply said they were already an American company.

Several journalists have also noted that this Act proposes a daily penalty of $1 million for any tech company flouting its rules. Significantly, most observers agree that Facebook can afford to pay that fine with ease, and that they will probably just see it as the cost of doing business.

If the United States cannot get behind digital currencies it will lose out to Southeast Asia where there is widespread adoption: instead of Facebook’s Libra becoming a leader, AliPay and WeChat Pay will be the platforms used internationally.

It looks like the Big Tech companies in the US are going to have to play ball with Wall Street, something they have managed to avoid in the past. Will they abandon their attachment to liberal principles and embrace those of the less principled occupants of the Street? Let’s see. But I doubt it will be possible to keep them out of finance in the long term.

Challenger banks, neobanks, whatever you want to call them, have been making significant in-roads in the banking sector and are attracting large chunks of venture capital investment says KPMG. There are some subtle differences between the two: challenger banks are often established firms that compete with larger financial institutions, while neobanks tend to be completely digital and favour operating via mobile devices, but the difference between them is somewhat blurred. What they do share in common is this: “these banks don’t carry the weight of legacy technology, so they can leapfrog over traditional infrastructure and disrupt the status quo.”

Two of the most prominent – Monzo and Atom Bank—raised $93 million and $140 million respectively last year. Starling Bank, which is ‘digital-only’ is raising a further $54 million in a new funding round. These are all British startups by the way.

Why are so many challenger banks British?

The chief reason for the fact that so many challenger banks are UK-based is this: Britain isn’t as saturated with big banks and their branches as the US, so there is more opportunity for non-traditional financial institutions. Furthermore, the UK was an early adopter of digital banking, dating back to the dotcom era of the late 1990s and early 2000s. Basically, the UK has had a head start in this financial area, although it would be a mistake to think that challenger banks are a UK-only phenomenon.

There are currently about 100 challenger banks worldwide: Brazil has Banco Original and Nubank, while Germany is home to SolarisBank and N26 and in Asia there is MyBank, WeBank, Timo, Jibun, K Bank and Kakao.

What advantage do challenger banks have?

They don’t have a legacy system and because most of them don’t offer a full suite of banking services they don’t have to operate within such tough regulatory environments. This means they have more freedom and flexibility, which in turn allows them to develop their customer base faster, especially in developing countries where bank branches are more rare than in the west.

What services do challenger banks offer?

Their focus is usually on niche products rather than trying to provide all the services that the big banks provide. For example, customers can open a current account with a relatively high rate of return and get loans, but they may have to go elsewhere for services such as credit cards, mortgages and wealth management. Some of the challenger banks do have banking licences, although not all follow this model.

Although challenger banks are on the rise, the old guard hasn’t disappeared just yet, and the traditional banks are aware of the threat the challengers pose and are preparing for battle. The traditional banks have the advantage of a large and well-establish customer base and strong branding that promotes trust. The challenger banks will have to earn trust. That will most likely come from the millennial generation over the next decade, because they are the group that have lost trust in the banks their parents use, and this is the audience that challenger banks will need to court if they are to become an established sector in banking.